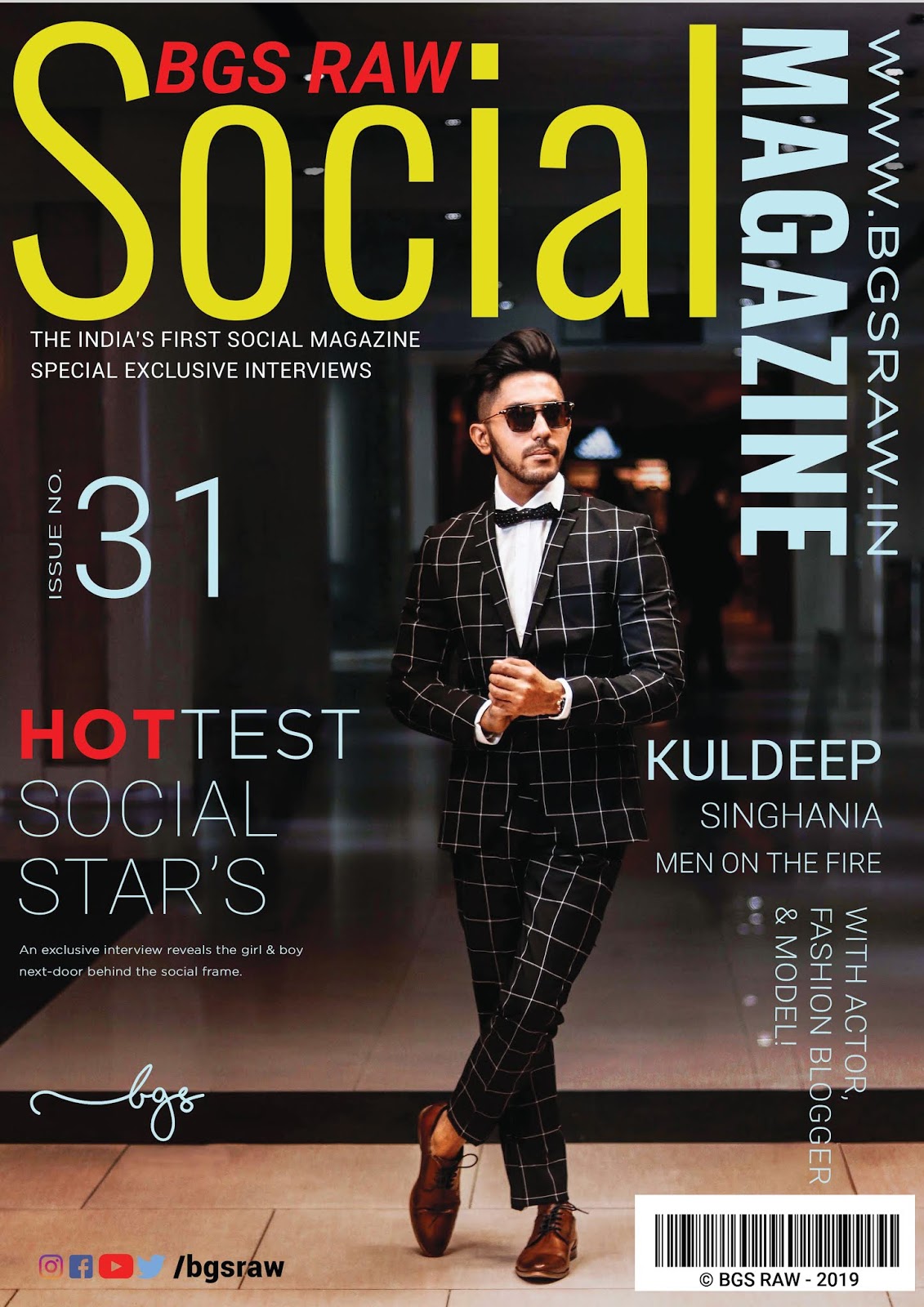 Hey there folks! This is our exclusive interview with Kuldeep Singhania from Mumbai, India on The Bgs Raw Social Magazine Interview and that's all about the hottest social stars/models/actors/YouTubers which you can read them here. An EXCLUSIVE interview reveals the girls-boys next door behind the social fire and so Bgs Raw has started there social magazine. And here we are introducing another guy, currently living at Mumbai, the very handsome and talented Kuldeep, Actor/Blogger/Influencer.


Kuldeep is now an actor, model, Instagram influencer, fashion blogger. He has been worked with national television like ZEE TV, Channel V. He was given a break by very famous actor/director Ekta Kapoor for the Balaji show on Channel V. He has also played state-level cricket for UP, badminton for Rajasthan. Recently he started his own production house which is also one of his startup naming The-K-Factor Production. After the interview, he gave a lot of information for the upcoming aspirants to join the film industry. He has worked with many popular brands like PUMA, Jaguar, Being Human, Wrangler and more. He had 150k+ fans over Instagram.


Let us know about him from Kuldeep:

Q. Hey Kuldeep, so tell us something about yourself?
Hi guys, this is Kuldeep Singhania. I am an actor/model and a social media influencer with a social media reach of nearly 1,50,000. I have done a number of shows on  Zee TV and channel V and has done over 100+ brand Endorsements with Brands like (Jaguar, Puma, being human, Wrangler, lifestyle, etc )


Q. How did you create your interest to be an actor and a model?
Well, I have been doing theatre since childhood, so being in front of the audience and performing for them has always been my source of Happiness. The confidence I gained along with a lot of Grooming sessions initiated the first step towards modeling as well


Q. What has been your greatest accomplishment as an actor? And what hardship do you face in this field?
Well as an actor your most memorable moment is when you get your first break, and I'll be forever thankful to Ekta Kapoor for believing in me and giving me a break in one of Balaji shows on Channel V.
After 6 months I was selected for a show on channel v which Rithvik Dhanjani hosted, and I won that show ...so that was when people in the industry started asking and my social media started growing.
When it comes to hardships, there is actually no end to hardships in anyone's career. For me it was getting rejected in audition's day in out, nepotism, unethical behavior and all sorts of industry politics. But what I feel, that if you genuinely want something, no one can stop you from achieving it.


Q. Let us know your goal & the future plan?
The ultimate goal for any aspiring actor is to work in high-end Bollywood films and I know that's gonna be coming soon. As of now some web series ( for alt Balaji and Netflix ) are in the pipeline along with some Amazing brand Endorsements that are coming up, so don't forget to check out my Instagram for more.


Q. Tell us what you're working on now.
Currently, I am endorsing brands like Shein, Spoylapp, Superdry, speedo, 2 mobile brands (can't reveal the name now)


Q.  Can you tell us about your acting style?
When it comes to acting style I am more into romantic and light comedy genre.... but I like to challenge myself every now and then and try up new characterizations.


Q. Do your family support you for your decisions?
Initially not, but after seeing that I could earn my own bread and butter., they were satisfied.


Q. What did you think to become in your childhood?
Initially, an astronaut, as I was always so fascinated by space, even till now. I can literally binge watch all YouTube videos related to space and astrophysics forever.


Q. Apart from your acting tell us something else or any incident you like to share?
Well apart from acting, I have recently started my own production house known as The - K - factor productions. It's still a baby but yes from pre to post-production of all my content happens under that along with other clients that we have.
Apart from that I am a national level cricket player and have played for UP and a state level. Badminton player for Rajasthan as well. I also love playing the piano as well.


Q. How will you recommend Bgs Raw as you have been active on social media for long?
Well, it is a great platform, Not many people do what you guys are doing .... every magazine writes about a Priyanka or a Deepika not many Support artists at ground level and pushes and promote them to newer audiences.
So thank you for doing what you guys are doing, even you guys should get public awareness and appreciation on social media platforms


Q. When was your first collaboration with a brand? How did you get your first sponsor as an actor?
My first brand collaboration was with Himalaya back in 2017. As an actor, it was a little difficult ... I guess it took around 3 months for my first break.


Q. Who is your favorite actor, and why?
I have always been a fan of Robert Downy jr ... be it Chaplin, due date, Sherlock Holmes, Iron man ... I mean the way gets into the skin of each character and make it his own is just mind-blowing.


Q. Can you give any idea to encourage upcoming aspirants about acting & modeling?
What I would suggest is don't just enter this industry coz of fame and money, if you really feel acting and modeling is your cup of tea, first test it out in your residential cities by doing theatre, joining acting workshops, grooming sessions and once you feel you have achieved the best version of yourself then head for Mumbai. And get associated with agencies, finding work will become a little easier.


Q. What was the biggest audience you have performed in front of?
I was recently a chief guest at a fashion event and had to walk the ramp in front of 10,000 + audience. So yeah that was so much fun.


Q. Any message you want to convey to our audience and your fans?
There is only one thing that I would say which I have been saying and following since forever and that is live your dream " now ". Sometimes later becomes never.
if you want to become an actor, model, musician, rapper, dancer whatever it is ....start taking productive actions on a daily basis without procrastinating and you'll be there before you know it.

⚠ Disclaimer: All the interviewed material content and questions are truly answered by the respective person in the frame. It may concern or belongs to concerned and copying any material without permission of the concerned may be penalized for content infringement and have to pay the royalty to the concerned person or to Bgs Raw.

💬 Hey there audience if you want to feature yourself or want to suggest any social star than just let us know on our official Instagram page. And we will try to contact as soon as possible. Even if you have any queries & questions or suggestion you are free to contact us. We also accept funds to support our work, so if you like to fund us click here. And also do not forget to write your words as feedback on this article in the comment box below.  Thanks 😃
tags: people search for kuldeep singhania wikipedia,
Premium By Raushan Design With Shroff Templates
Bgs Raw is your real-time live magazine. Get entertainment news, stories, interviews delivered straight to your Inbox ...
Premium By Raushan Design With Shroff Templates