Pachtaoge: Most of Indians Die Because of Love Than Terrorist Attack - As Per Study Report

Most of Indians Die Because of Love Than Terrorist Attack - As Per Study Report. After the viral song "Pachtaoge" featuring 'Vicky Kaushal' and 'Noora Fatehi' 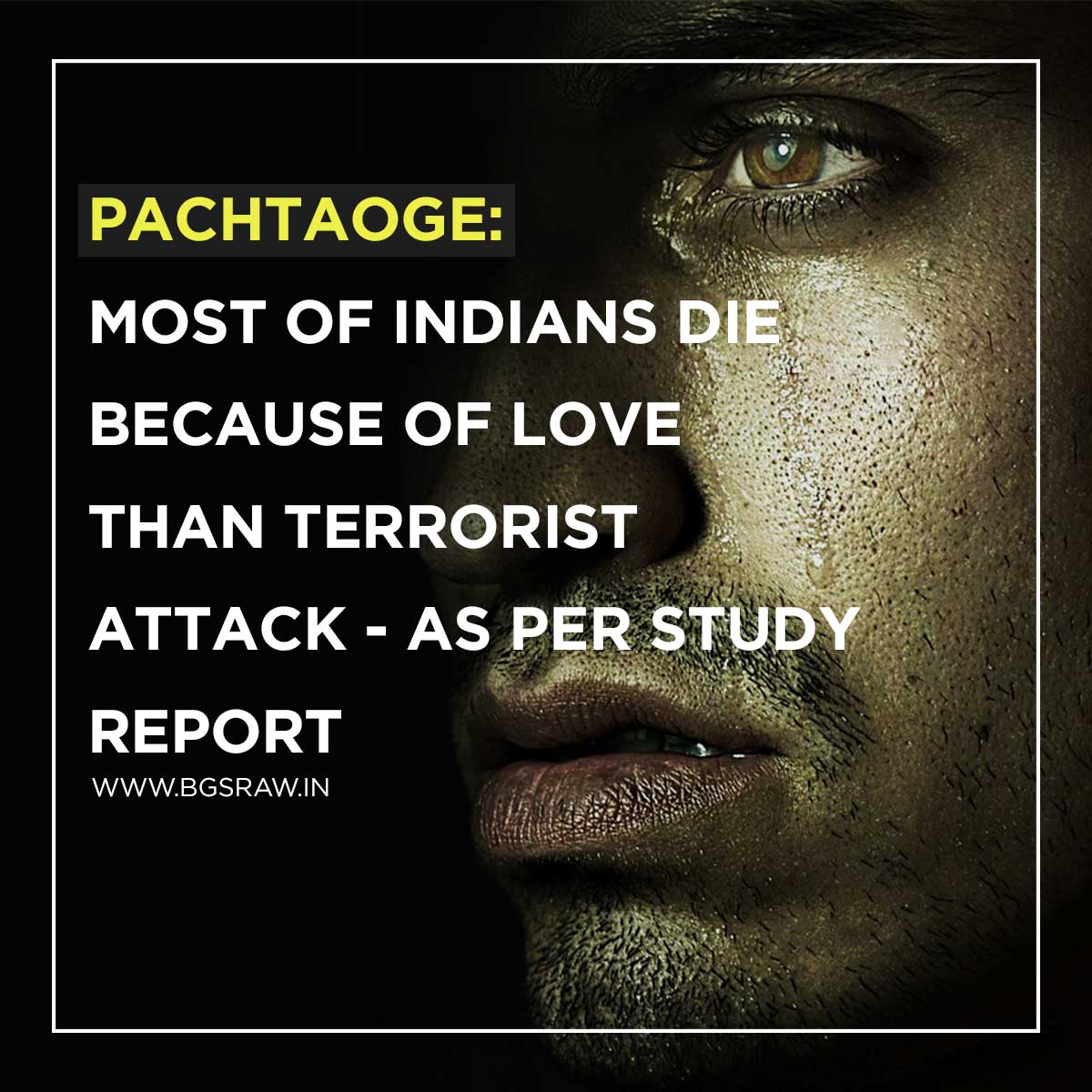 Bgs Raw: After the viral HeartBreak song "Pachtaoge" featuring 'Vicky Kaushal' and 'Noora Fatehi'. The song was sung by Arijit Singh whit his soulful voice he had taken the nation in love. And this song is all about a cheating partner. In the story (Vicky) do not mind to drink poison given by his wife (Noora) who cheat on him. As it was shown that her husband (Vicky) catches red-handed with her another partner after she leaves dinner in the midway to meet her boyfriend.


Most of Indians Die Because of Love Than Terrorist Attack

So let come to the main topic as mentioned in the title. So as in the past few years and we listen about the past,  India has witnessed many terror attacks lately and the casualties are saddening over the destruction caused. However, recent research has shown that love has actually led to more deaths in the country than terrorist attacks.

As per media report, of the year 2001 to 2015, there were 38,585 murders and culpable homicides due to love apart from79, it also includes 189 suicides. Interestingly, there were 2.6 lakh kidnapping cases related to marriage. Terror, on the other hand, had killed a comparatively lesser number of individuals and was at 20,000 people.

The state of Andhra Pradesh has the highest number of murder cases due to love followed by Uttar Pradesh, Maharashtra, Tamil Nadu, and Madhya Pradesh.

Most of the cases included heartbroken men turned violent and killing the women. And the lovers who didn’t get the love they showed the same actions and love affairs were too.

Conclusion: Today people don't have control over themselves. Most of the lover basically the male partner goes very aggressive on this hot topic of LOVE. After reading this article, take a moment to learn and think, what your parents will go through your missing with them. I know you may not be the same guys as other's do, but to spread the positive message in our society, friends, and collics. Because someone told that “It's a great honor,” said Fedyor. “To save a life. You saved many.” “Horace normally didn't need anyone else to save his life.

Publisher: Hey this is Bikram Kr Singh, I'm an Entrepreneur, Artist, Writer, Certified Digital Marketing by Google. To know more about me just follow me on my Instagram handle @bikramkrsingh1. Thanks for reading this article exclusively Most of Indians Die Because of Love Than Terrorist Attack on Raw.


We need your support to keep delivering quality journalism, to maintain our openness and to protect our precious independence. Every reader contribution, big or small, is so valuable. Support The Bgs Raw Social Magazine from as little as $1 and it only takes a minute. Thank you
SUPPORT BGS RAW HERE