Bgs Raw News: 'Sasural Genda Phool' & 'Namak Ishk ka' singer Rekha Bhardwaj is in headlines this day. The reason is some of her teet, which she took aim at the reality shows. She told, these days singing reality shows are selling drama instead of music.

She wrote in one of her tweets that:

Many people on the internet supported her tweet. By tweeting positively.

One of the users wrote:

"That's right. I have stopped watching these shows for the last three-four years. They sell emotions to become famous. Also, they are spoiling the future of the children who participate in them. Children participating in these join them for a few moments of fame."

"This is the reality of reality shows. Is sad But nobody bothers. Channel owners, producers, judges, viewers, even parents want to enjoy Limelight. That too by taking advantage of the talent of these children. This is a kind of child labor."

"Nobody sees these contestants if they don't cry. Or do not tell how hard they have reached there."

"I feel very sad today. Please do not let me ever be part of such shows. This is just noise in the name of music. Every song is for you to dance."

"Nobody has any meaning with the future of these children. What makes me sad is that no one is guiding these children. No one is teaching music to them like a prayer. They are being taught to just ask for votes. To compete with each other. Or look glamorous. All this takes advantage of the innocence of children." 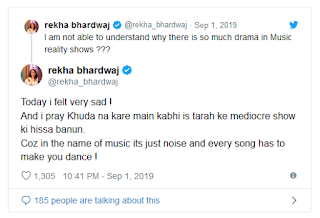 And the statement made by Rekha was also true. Because the reality shows put a bunch pressure on the contestants. When this contestant are as children. They are thought to compete among themselves, which they even do not understand the competition process. And when they lose or have to leave the stage, they start crying bitterly on stage. The production does not matter about there minds, only for getting TRPs they are hurting the kid's personality.

We also even request you to change this format, even if you want to earn through your business. But earning by hurting someone is like fakes shows on television.

👉 Publisher:  This report was discovered by Bgs Raw Team, with lots of analysis, research, and survey on the internet. If you've any query regarding this article, get free to write below in comment box. We used Images, Media Information, Videos, for not re-selling, the media are only meant for promotional only.


We need your support to keep delivering quality journalism, to maintain our openness and to protect our precious independence. Every reader contribution, big or small, is so valuable. Support The Bgs Raw Social Magazine from as little as $1 – and it only takes a minute. Thank you
SUPPORT BGS RAW HERE