14 best Bollywood movies to watch on Netflix, Amazon Prime and Hotstar during social distancing in the novel coronavirus 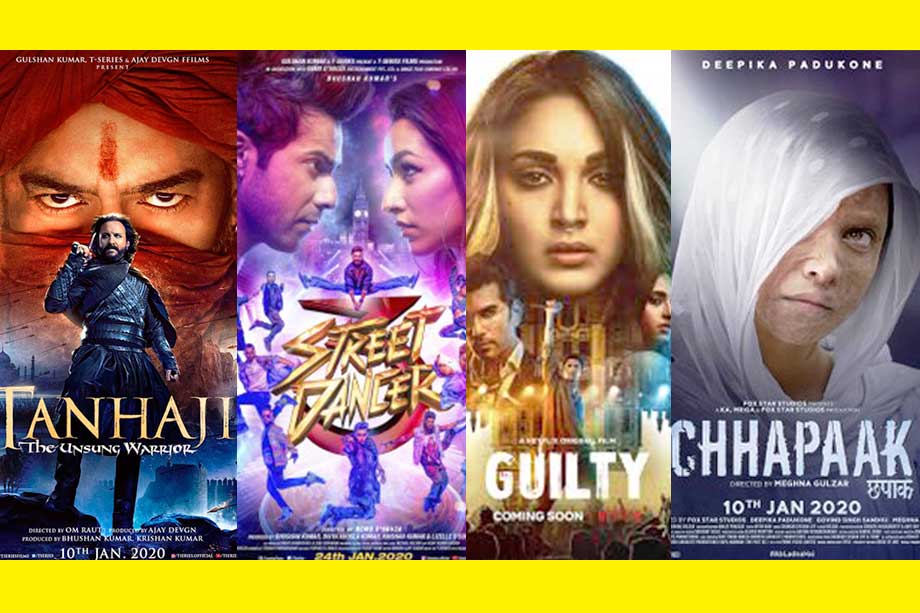 Bgs Raw News: Novel Coronavirus has everyone go into lockdown in their own homes. In times like this, we have brought you 14 best Bollywood movies on Netflix, Amazon Prime Video and Hotstar that will keep you company in the 14 days that we need to quarantine ourselves.

The list comprises mostly new Bollywood films that you may have missed out on seeing in the theatres. All you need to do is get a subscription and check these Bollywood movies on Netflix, Amazon Prime Video and Hotstar off the list.


1. Tanaji on Hotstar
In this period drama, Ajay Devgn plays the lead role as Tanhaji Malusare, one of the military assistants of Chhatrapati Shivaji Maharaj. It is based on how Malusare led the Maratha's Battle of Sinhagad from the Mughals. A special shoutout goes to Saif Ali Khan, who did a great job portraying the antagonist, Udaybhan Singh Rathore.


2. Panga on Hotstar
In case you missed out on watching this Kangana Ranaut-starrer in the theatres, here’s your chance to catch it now. It is inspired by the real-life story of a national level Kabbadi player. Not only does it follow her struggle and achievements, but highlights the importance of love and family in order to become successful. If you’re looking for a feel-good film, this one should be your pick.


3. Street Dancer 3D on Amazon Prime Video
Street Dancer 3D was initially planned to release as a sequel of ABCD 2, but once Disney exited from Indian film production, Bhushan Kumar took over as producer. Featuring Varun Dhawan and Shraddha Kapoor in lead roles, this film tells the story of two rival groups hailing from India and Pakistan who put aside their differences to represent their Asian roots on a global platform. This one is a must-watch for all dance lovers.

4. Chhapaak on Hotstar
If you’re looking for a reason, you should watch this film because it features Deepika Padukone’s best career performance. It is based on the life of an acid-attack victim, Laxmi Agarwal. It is one of the most heart-breaking movies and will make you aware of the problem of acid attacks in the country.

5. Maardaani 2 on Amazon Prime Video
After the success of Mardaani, Rani Mukerji and the team decided to roll out the sequel, which had its digital premiere in the recent past. Mardaani 2 focuses on the increased rapes in our country and Shivani Shivaji Roy (played by Rani Mukerji) goes on a mission to nab the criminal. This crime movie will definitely keep you glued to the screen.

6. War on Amazon Prime Video
War stars Hrithik Roshan and Tiger Shroff as reel life mentor and mentee. Roshan plays the role of Major Kabir, a RAW agent who is also Shroff aka Captain Khalid Rahmaniz’s mentor. After Roshan goes rogue, RAW assigns Shroff a mission to eliminate his former mentor. What follows through the film are action-packed punches, great cinematography and of course a grueling climax that brings them face to face for combat. Considering that it was the highest-grossing film of 2019, you should check this one out.

7. Super 30 on Hotstar
Super 30, featuring Hrithik Roshan in the lead role, is another biopic among the Bollywood movies on Hotstar. It tells the real-life story of mathematician Anand Kumar and his educational program of the same name, which trains 30 students for the IIT entrance exam. Super 30 was among the highest-grossing films of 2019 and for a change it features Hrithik in a de-glammed avatar.

8. Bala on Hotstar
While 2019 saw three films being made on the subject of premature balding, Ayushmann Khurrana’s Bala stood out for three reasons: his conviction to the character, his unique dilemmas and their solutions and of course hilarious TikTok videos. But that’s just what Khurrana brought to the table. The film also touched upon the subjects of India’s obsession with fair skin and why divorcing someone does not necessarily have to translate into unhappiness as commonly perceived in Bollywood flicks.

9. Guilty on Netflix
The newest film that was added to the roster of Bollywood movies on Netflix is Guilty. It is headlined by Kiara Advani, who’s on-screen boyfriend is accused of rape. Guilty is that piece of cinema that will make you think about your privileges. It not only talks about crimes against women but also puts forth a conversation regarding people who misuse this terrible fact to their advantage.

These are the movies you can download or watch online via the streaming platform on Amazon Prime Video, Hotstar and Netflix. Just enjoy yourself at home and keep yourself healthy, if you can please share these best Bollywood movies to recommend your friends to watch in this social distancing and do not get bored.
Premium By Raushan Design With Shroff Templates
Bgs Raw is your real-time live magazine. Get entertainment news, stories, interviews delivered straight to your Inbox ...
Premium By Raushan Design With Shroff Templates