A glimpse of eternal snows Uttarakhand Himalayas, Parvada, rich in heritage and culture

A glimpse of eternal snows Uttarakhand Himalayas, Parvada, rich in heritage and culture. By: Manjulika Pramod 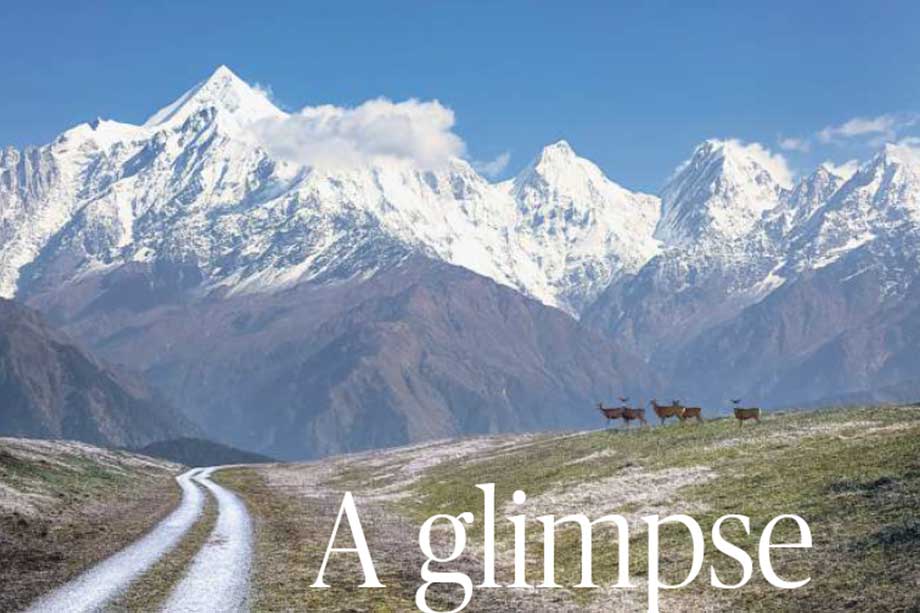 When it comes to beautiful skylines, kaleidoscopic sunsets, bucolic serenity, and unadulterated warmth, rustic escapades are the best. My most recent prelock down indulgence was a Himalayan mountain village in the South Gola Range of Nainital district in Uttarakhand.

Located at 7,000 ft, eight kilometers from Mukteshwar, Parvada has only 750 families. It is not a straight out of a fairytale kind of village, but it whispers tranquility at every winding turn. To get there, I disembarked at Kathgodam Railway Station. Young Trilok drove me to my destination. “There is no time in the year when you need a fan in Parvada,” said the native. “The summers are windy in the day and chilly in the night, winter temperatures hover between 5C and 8C. And the village received unpredictable snow in February,” he added.

ALSO READ
* Stress and anxiety rise amid pandemic during the lockdown


I had booked my stay at Parvada Bungalows, in Parvada, for three days. It was post3 pm when I checked in, but it was not too late for a fresh glass of rhododendron juice and a wholesome Pahadi meal. The highlights were bhaangjeere ki chutney (hempseed and cumin paste), bhat lentil, brinjal bharta, cucumber yoghurt and jhingore ka kheer (barnyard millet pudding). After the hearty meal, I could have easily fallen asleep but the views of the mountains mothered village and the forests from my room were winsome.

I could not wait to walk down the winding roads and was accompanied by Caron, the manager of the homestay. She directed me towards the “shroth”, a natural source of water which was used for drinking and agriculture. “While potato is grown in abundance, the villagers growa lot of peach, pears, apples, apricots, plum and walnuts,” she said. We reached a stream where the locals perform Ganesh Visarjan. Before I could head for the upper reaches, it began to rain and I had to forgo the bonfi_re and snuggle into bed.


The next morning, I spotted a number of birds like the blue jay, Rufous treepie, warbler, and the Himalayan bulbul. Girls in school uniforms were carrying plates full of rice, jaggery, and fl_owers for the festival called Phool Dei, which takes place midMarch. The children extend good wishes to their neighbours by off_ering them fl_owers at their door. At the end of the festival, the neighbours pamper the kids with gifts.
Bear haven
On the second day, I visited Bhalugaad waterfalls. After a drive of 45 minutes, a hike of 1.5 kilometers through stones, streams, and bridges took me to the gorgeous falls. This place was opened for tourists a few years ago. In the evening, three local boys came to sing around the bonfi_re. They had formed a group of more than 40 people, from the nearby villages and aimed at reviving their local music and songs. In the near future, they plan to open a studio in Bhatelia. 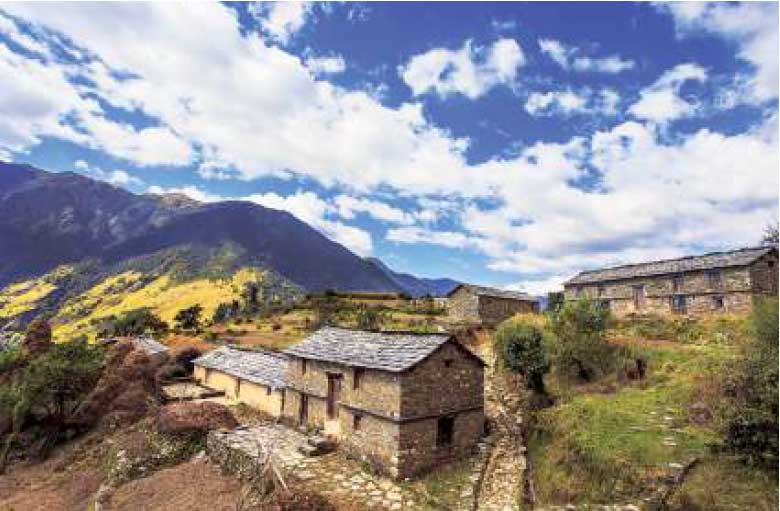 The next day I headed out towards Jageshwar Dham temple near Binsar valley. The day was bright and on the way, I had clear views of the Shivalik ranges. Amidst the dense deodar trees, the complex of more than a hundred 12thCentury stone temples at Jageshwar made for a lovely sight. Jageshwar has a lot of religious appeal for Hindus being the eighth jyotirling. I also visited the Archaeological Museum, a treasure house of 160 rare sculptures, ranging from the 8th16th Centuries, collected from Jageshwar, Kuber, and Dandeshwar temples.
I was back in Parvada to meet women from the village’s SEAKHO group, which teaches local women knitting and crafting, who had come to the homestay to display their handmade shawls, caps, stoles, socks, infinity scarves and more. In the evening, Trilok drove me to the Mukteshwar temple and guided me to the purplepinkish sunset view at Chauli Ki Jaali. That night was about great food and star gazing. On the last day, I attended a yoga class under the guidance of a local teacher. Later in the afternoon, I left by train for Delhi thinking about this village where I had lost a piece of my heart.
----------
Advertisement