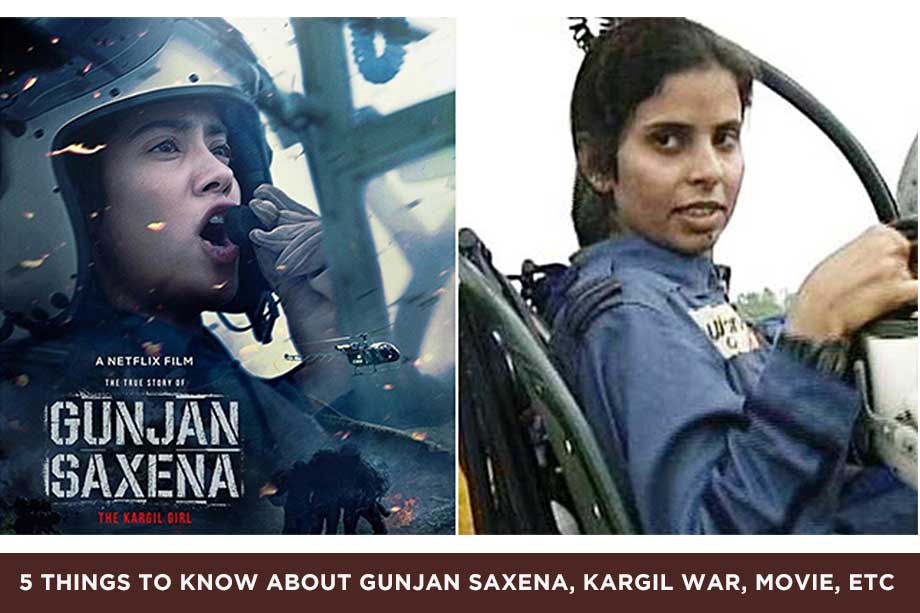 5 Things to know about Gunjan Saxena, Kargil War, Movie, etc. The biopic is based on the life of Indian Air Force pilot Gunjan Saxena who became the first Indian woman pilot to fly in a combat zone during the Kargil war. Directed by Johar, the film stars Janhvi Kapoor in the titular role.

Who is Gunjan Saxena?
Flight lieutenant Gunjan Saxena is the first woman Indian Air Force (IAF) officer to enter a war zone. She made history when she flew a Cheetah helicopter in the Kargil war and rescued several soldiers.

Saxena was inspired to join the IAF by her father who served in the Indian Army. When a five-year-old Gunjan saw the cockpit for the first time, she dreamed of flying Indian Airforce fighter jets.


Gunjan Saxena Education
After pursuing her graduation from Hansraj College in New Delhi, Gunjan got the opportunity to join the first batch of female IAF trainee pilots.

Popular for
While women pilots were not allowed to fly fighter jets owing to extreme mental and physical stress they would have to endure in the combat areas, Gunjan got a chance to fly into the combat zone when war struck in 1999.

Gunjan Saxena Award
Gunjan was later awarded the Shaurya Chakra by the Indian government for her courage and bravery.

Biographical Movie
“An inspirational true story of a young girl and her dream. Gunjan Saxena - #TheKargilGirl, coming soon on Netflix. #GunjanSaxenaOnNetflix,” Karan Johar wrote on Twitter. The video was attached to the tweet that had memories of the Gunjan Saxena as Janhvi narrates the story.

The cast of the movie:
The film was scheduled to release theatrically on 13 March 2020. It was again pulled from the release schedule. Netflix later acquired distribution rights to the film and on 9 June 2020 Netflix released a teaser video introducing Gujan Saxena and announcing that the film will be streamed on Netflix