Top 10 Youtubers in India 2020 with most subscribed, earning and views. on Youtube Channels in India researched by Bgs Raw Magazine independently 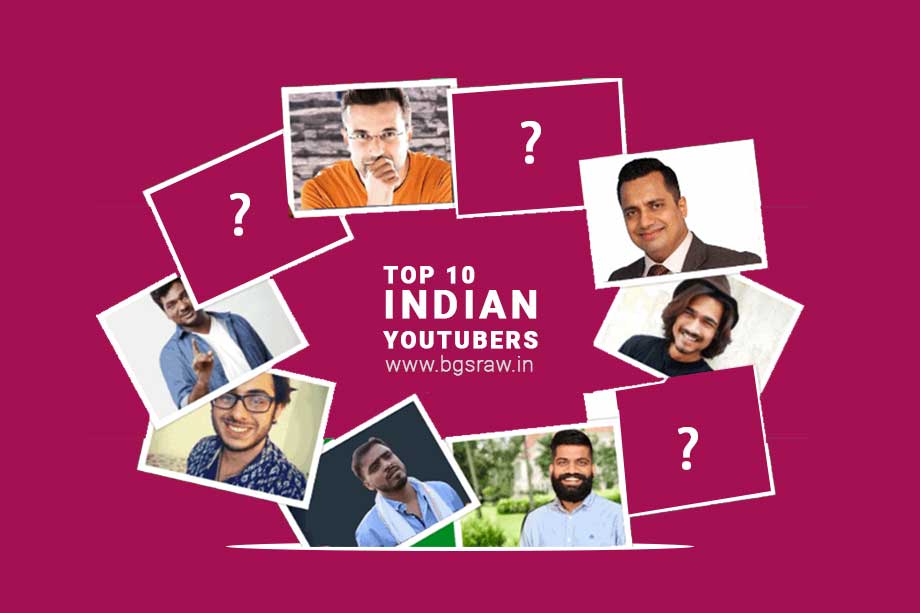 Top 10 Youtubers in India 2020, here we have research and found the top creators from India with their earnings, subscribers, content views, etc.

After the digital edge, online content has become the most demanded entertainment strategies for creators. And the audience has no way back to celebrate their performance and make them the next superstar.

The list of these top 10 Indian Youtubers has been changed with time in 2020. And Carry Minati holds the first position after the long controversial content created on the topic Youtube vs TikTok which was also later removed by Youtube India for hate speech. However, before removing the video it was already made a huge impact on his channel for his curious fans.

Ajay Nagar aka CarryMinati has made such records in a short time that no one would have thought of this Delhi-based boy of 21 years as a roster, comedian, singer, and gamer.

We can tell you that only 2 videos of CarryMinati have broken many records on YouTube. If a video was not removed from YouTube, then this video would have made history on the internet content.

Videos: (1) YouTube VS TikTok: The End (removed from YouTube) and (2)Yalgaar (music video)
Ajey Nagar had even staked his studies for YouTube. After studying up to 11th, he quit studying and became a full-time YouTuber and chose YouTube as a career.

Today CarryMinati is not only a YouTuber but has become a hero for many people.

Recently released music video 'Yalgaar' has also made many records on YouTube. This music video by CarryMinati is the most liked video in the shortest time in the history of YouTube India. Over 2 million likes were received in 2 hours as soon as the video was uploaded.

And with this stardom, we have seen this growth on CarryMinati’s channel, after gaining more than 10M subscribers in a span of about two weeks, today he has become the No.1 Indian YouTuber and Bgs Raw congratulates him very much for upcoming contents.

He has another YouTube channel name CarryisLive, where he streams live gaming and uploads videos of the game. His second channel has about 7M subscribers.

Amit used to upload his videos on Facebook before coming to YouTube and he got a good response from there. After which he started uploading videos on YouTube and here he also gets huge success here.

In Amit Bhadana’s videos, you get to see the native language and Poetry type dialogues, which many people also like. Amit Bhadana has worked hard to achieve all these achievements.

Ashish Chanchlani has built his empire by creating comedy videos on YouTube, but there was a time when Ashish was excluded from comedy stage plays due to his obesity.

But Ashish never lost due to these conditions and today he is entertaining millions with his comedy.

Bhuvan Bam is a multi-talented YouTuber who is a very good comedian, actor, singer-composer, and songwriter.

BB Ki Vines channel has also achieved a milestone in its name and is the first 10M subscribers for the Indian Individual Creator of YouTube. He alone plays the role of the many characters in his videos.

People liked his talent very much and this is what makes him different from other YouTubers.

A question for you about Bhuvan Bam “Do you like him as a comedian or a singer, tell me in the comments”

About 1 month before today, a YouTuber, who was ranked 5th in the list of top 10 Indian YouTubers, is at the top today, But now the tech guy Gaurav Chaudhary is in this position of the list.

On the Technical Guruji YouTube channel you will get the latest news and tech review related to technology. He is one of the most consistent YouTubers in India, uploading two videos of the daily, one of which is of Daily Tech News.

Today, there are more than 3100 videos on his channel which are related to all the tech and you will get a few videos of Motivation too.

Apart from TG, he has another YouTube channel named Gaurav Chaudhary where he posts vlogs videos. This channel of his is also growing well, he has 3.73M subscribers in this channel and has 122 videos.

He says that “I upload Motivational videos on my channel, if the ads start running in the middle of the videos, then the viewers will get distracted, people will not be able to understand what I want to tell.”

Round2hell is such a team of 3 people who have made people of not only India but the whole world crazy for their comedy. This team has made 3 boys from Moradabad Nazim, Basim and Zayn.

The Round2hell channel was created on YouTube in 2014. The videos of this channel were not only seen in the beginning but by working hard, these people kept making videos and today the time has come that this channel is one of the top 10 individuals YouTube channels in India.

A 20-year-old boy’s hard work is behind the success of the FactTechz YouTube channel and the boy’s name is Rajesh Kumar.

Subsequently, in 4 years' time, he has got 14.1 million subscribers. You also say that Rajesh Kumar was the first YouTuber who made videos of Top 10 and Facts in Hindi language, after which many YouTubers came to this field seeing his success.

Dr. Vivek Bindra is one of the most well known Motivational speaker, business coach and business trainer in India today.

He lost his parents at a young age, but despite this, he made himself capable that he could inspire millions with his speech and business training. Today, if anyone is explaining business properly in the Hindi language, then it is Dr. Vivek Bindra.

Emiway Bantai is an individual rap artist who does everything by rapping and writing and editing himself in his videos.

And at this time he is the most favorite rapper of the people of India. Due to this, he has made his place in the top 10 in YouTube India in a very short time and got his name included in the list of top 10 Indian YouTubers.

All the creators featured in the list are researched by Bgs Raw Magazine independently, this list was created by viewing the channel, checked the views, also we took the help of the third-party websites for data analysis. If you have any opinion about these creators you are welcome to write in the comment below.

📣 Bgs Raw is now available on TELEGRAM. Get more latest news & stories updates, also you can join us on WhatsApp broadcast ... to get exclusive updates!