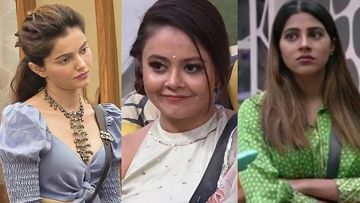 We will get the winner of Bigg Boss 14 on February 21. Rakhi Sawant, Rahul Vaidya, Aly Goni, Rubina Dilaik and Nikki Tamboli are in the top five currently. Devoleena Bhattacharjee who had entered the show has Eijaz Khan's proxy has opened up about the game of the top five finalists of the show. In an interview with ETimes, she called Rubina Dilaik cunning. She said, "She is a very cunning girl. Duniya ki saari bi***ing and back-biting wohi karti hai. And then she feigns ignorance and innocence." Devoleena also praised Aly for his game. She said, "He is nice. He's playing his cards alright but he's upfront about his likes and dislikes. He does bi**ch but who doesn't? But he certainly does not do anything behind your back like Rubina does."

Devoleena also showered praises on her best friend from the show, Rakhi Sawant. She said, "She is a fantastic human being. Woh todh-mod ke baat nahi kar sakti, that's her drawback. But then, isn't it such people only who have a fully clean heart? The person who does wrong and then plays with words to prove him/herself innocent is nothing but cunning, isn't it?" Devoleena did not share a good bond with Nikki Tamboli. It won't be wrong to say that they both hated each other. Speaking about Nikki Tamboli's game, Devoleena said, "She is an ill-behaved person. She has just clung on to Rubina and come into the last five. She herself says that she didn't see herself till wherever she has reached in the show. She has no respect for anybody. She feels she is the chosen one and lives under the impression that the more bad you behave on the show, the better chances you have of emerging as winner."

The Saath Nibhaana Saathiya actress feel Rahul Vaidya has compromised on his self-respect. She said, "He has chalked out his route and he has his fair share of strategies, but I think he has compromised on his self-respect in return. Arshi Khan and Nikki spoke very badly to and about him but after some time, he was fine with them." She was also asked who she feels will be the winner and does she agree with people calling Rahul Vaidya and Rubin as the top two finalists. She said, "I don't believe in bhed-chaal. I don't think Rubina and Nikki deserve to win. I know the fan-base plays a large role in determining the end result but based on who has played the game better, my choice for the winner is either Rahul or Rakhi. On similar grounds, I wouldn't consider Rubina and Nikki even in the Top 3."