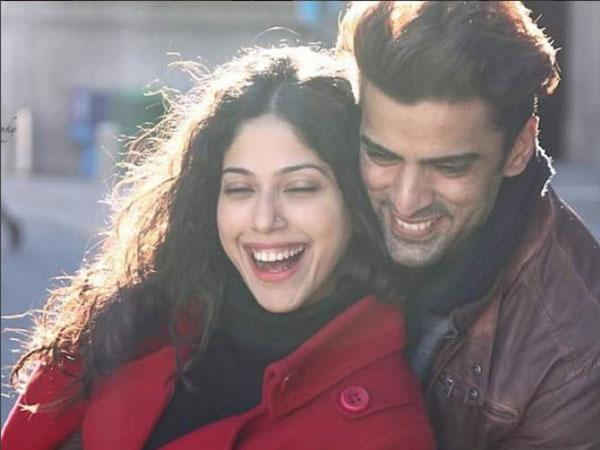 Aditi Shirwaikar and Mohit Malik announced their pregnancy news in December last year. It was a pregnancy galore as loads of celebs from the film and television industry had announced the pregnancy last year. Talking about Aditi Shirwaikar and Mohit Malik's pregnancy, the former has entered into the seventh month of her pregnancy, the last trimester. And being a Maharashtrian, a baby shower called Oth bharni also known as Godh Bharai was held for the actress in Marathi style. Mohit Malik shared some gorgeous pictures of them together from their baby shower ceremony. In the first picture, we see Mohit cuddling Aditi who is seen sitting on a special settee. Aditi is all dolled up in Maharashtrian style. Mohit has Aditi in his embrace. The second picture sees Mohit kissing Aditi on her cheek while the latter is seen blushing and glowing in the maternity glow. Mohit Malik captioned the post saying, "Navari aali Congratulations my love !" Have a dekko at the pictures post by Mohit Malik below:

Aditi took to her Instagram handle a couple of minutes ago and shared a pretty video in which she can be seen with Mohit. Mame Khan's Chaudhary playing in the background. Have a dekko at the video post here:

Have a look at some videos and pictures of Mohit from the baby shower part below:

Earlier, in an interview with Bombay Times, Mohit Malik had shared the happy news. He said, "I was in the midst of a shoot when Addite called to give me the good news. All she said was, 'The tests are positive.' For a minute, I panicked and assumed she was talking about testing positive for COVID-19! But she laughed and told me that she was pregnant and that we are going to become parents. It took two days for the news to sink in. I kept asking her to check again and again."

Aditi took had gushed about the news saying, "She said, "I have my restaurant business to take care of, but for the time being, all operations will be done from home. Both Mohit and I are taking extra precautions due to the pandemic and we maintain social distancing as much as possible. We avoid meeting friends, who have only recently started meeting each other. My father, who was unwell for the past few months and is recovering now, is most excited to become a grandpa!"

Hey there! BollywoodLife.Com Awards 2021 are back and Nominations Are Now Open!

Click Here to Nominate Your Favourites and Stand a Chance to WIN Exciting Prizes.