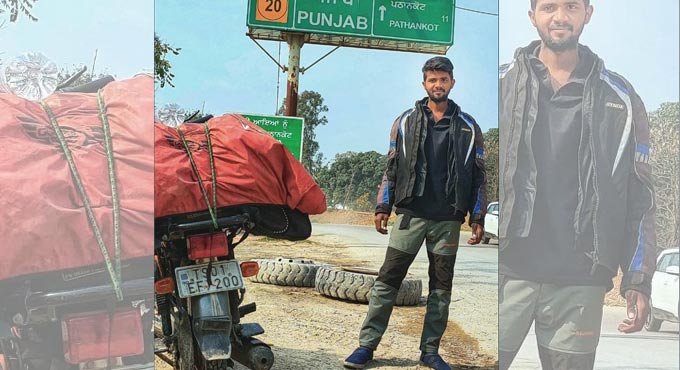 Budding Moto Vlogger from the city, Sudheer Kumar Reddy died allegedly after his sports bike crashed into a road median at Narsinghpur in Madhya Pradesh on Tuesday night. He is suspected to have dozed off while driving leading to the accident.

According to the information available, the incident occurred when Sudheer Kumar (26) who went on a ride to Spiti Valley in Himachal Pradesh last week was returning to Utnoor in Adilabad district.

It is learned that Sudheer Kumar, who was wearing a standard helmet, gloves, and gears, suffered grievous multiple bleeding injuries during the accident. Those passing by noticed and rushed to his rescue. He died while being shifted to the hospital.

He has gone to Himalayas, China, Pakistan borders. He got fame when he went to Manali on a “TVSXL Bike”. He was a great traveler and motor lover.

Fans were shocked to hear this news, and they took Twitter to make their condolence, here how the tweets came around for Sudheer:

i just heard news about our #Telugu Moto Vlogger #MotoVlogs #SudheerKumarReddy 😢died in a road accident...

RIP bro #SudheerKumarReddy. I hope all the moto vloggers should take necessary actions to prevent accidents.

We miss you so badly bro
Rest in Peace Anna😢💐

The Source of this report is taken from the https://telanganatoday.com and published with the head title changed and adding few aditional lines.