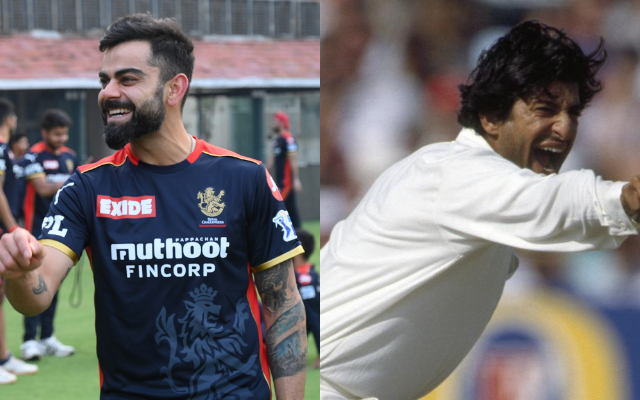 He was called the ‘White Lightning’. He was a name who was dreaded during the 1990s. Allan Donald picked up 330 wickets in Test cricket, and 272 wickets in ODI cricket. He has scalped a total of 22 five-wicket hauls in his international career and was the lynchpin of the South African bowling attack.

So, how would it be if he bowled to the 2nd highest run-scorer in IPL history and the batting talisman of the Delhi Capitals’ (DC) side, Shikhar Dhawan? Dhawan is a legend in the IPL and has scored a colossal 5577 runs in IPL cricket. Dhawan has also scored 44 fifties in the tournament.

A bowler who terrorized batsmen against a batsman who could take any bowling attack to the cleaners on his day. Allan Donald bowling to Shikhar Dhawan would have been a treat to watch in the IPL.

Brian Lara will go down as one of the greatest batsmen of his generation and was often compared with the man who is also called the ‘God of Cricket’, Sachin Tendulkar. Lara had almost every shot in the book, and he decimated bowling attacks with flamboyance.

Lara scored 11953 runs in his Test career, and also plundered 10405 runs in the ODI format of the game as well. Also, Lara is the only batsman in history to have smashed a quadruple century in Test cricket. And, if he faced up against Jasprit Bumrah, it would have been a contest worth watching, isn’t it?

Bumrah is the master of the yorker and can fox the batsman with clever variations in pace. He has scalped 115 wickets in his IPL career and has scalped them at an average of 24.17. The accuracy of Bumrah against the class of Lara would have been a mouthwatering battle.

Courtney Walsh was a nightmare for batsmen. He was extremely tall and would send in missiles that would take off awkwardly from the pitch. And, he generated numbers that qualify him as one of the greatest bowlers to have played the game.

Walsh picked up a whopping 519 wickets in Test matches and picked them up at an average of 24.45. He also prized out 227 batsmen in the ODI format of the game as well. On the other hand, we have Rohit Sharma, a legend of the T20 format of the game.

The ‘Hitman’ is the only batsman to have scored 4 centuries in T20I cricket and is also the 3rd highest run-scorer in T20I cricket as well. Sharma has scored 2864 runs in T20Is and has scored them at an average of 32.54 and a strike rate of close to 140.

Rohit Sharma is a colossus in IPL cricket too and is the 4th highest run-scorer in the history of the league. The Mumbai Indians’ (MI) skipper has scored 5480 runs and has scored them at an average of 31.49, and a strike rate of 130.50.

So, will Courtney Walsh bounce the ‘Hitman’ out, or will Rohit Sharma nonchalantly pull Walsh over deep mid-wicket?

AB de Villiers is a phenomenon. He is a man who can literally hit the ball to any place in the stadium he wants to. And, the numbers too, suggest that he is one of the greatest batsmen to have ever wielded a willow in IPL cricket.

The South African batting legend has scored 5056 runs in the IPL and has scored them at an average in excess of 40 and a whopping strike rate of 152.38. He has also scored 3 hundreds and 40 fifties in the IPL.

Now, just imagine Waqar Younis bowling to de Villiers. Younis is a master of the art of reverse swing and has bamboozled many batsmen during his heydays. The Pakistan bowling legend has scalped 789 wickets in international cricket and has also picked up as many as 35 five-wicket hauls in his career that spanned close to a decade and a half.

So, who would have emerged on top, in this battle of all-time greats?

The very mention of these two names is enough to excite cricket fans across the world. And, if these two men would have battled against one another, the excitement levels would have reached fever pitch. Let us take the help of numbers, as that would give us an idea about the magnitude of this battle.

Wasim Akram, on the other hand, will qualify as one of the greatest bowlers ever, in the history of the game. Akram is the only fast bowler to have taken over 500 wickets in the ODI format of the game. The left-arm pace bowling icon has also picked up 414 wickets in Test match cricket as well.

Akram’s battles with the greats of his time, including the likes of Sachin Tendulkar and Brian Lara will forever be etched in the memories of cricket fans for posterity. Would Akram be able to bamboozle Kohli with the plethora of tricks up his sleeve, or will Kohli dish out one of his ravishing cover drives against one of the greatest pacers to have played the game?