Get the shot, get a beer': Doctor convinces people in a bar to get vaccine for free beer

Get the shot, get a beer': Doctor convinces people in a bar to get vaccine for free beer 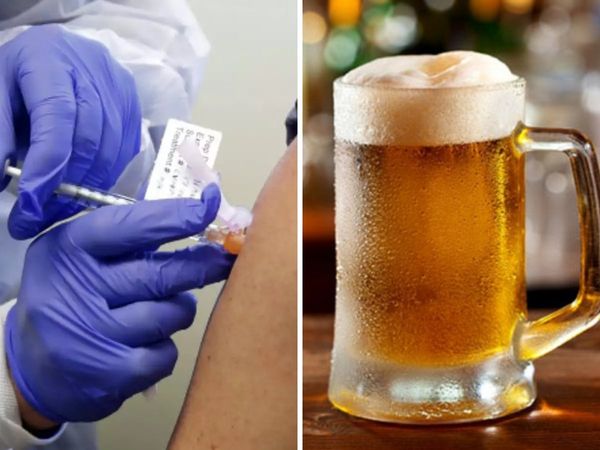 Many experts have advised to lay off the alcohol before and after taking a vaccine shot. However, there is no evidence that suggests alcohol after a shot interferes with the system.

It goes without saying that mass vaccination is the need of the hour to curb the COVID-19 virus.

Currently, vaccination numbers are high and impressive in many parts of the world. However, there are many countries where the process has slowed down in the past few weeks.

A significant percentage of people from all age groups have been reluctant of taking the jab in many countries. In order to accelerate the process again, authorities are now throwing around incentives such as free game tickets, and food items to vaccine takers.

But one doctor named Gale Burstein may have found the most effective incentive to accelerate the vaccination process again.

Burnstein said people who have not received jabs yet can be persuaded with free beer offers.

"Our county executive Mark Poloncarz developed this idea. It comes from a Buffalo tradition where many times when people go out and drink, they'll drink a shot of hard liquor and they'll chase it down with a beer. That's a common kind of alcohol order," Dr. Burnstein, who is the Health Commissioner of Erie County, told SLATE.

"Mark thought of a shot and a chaser vaccine clinic, where if people received a shot of COVID-19 vaccine, they could get a pint of beer as chaser. People in their 20s and 30s is an age group where we haven't had as high penetration for the COVID-19 vaccine, or as high as we would like " she added.

Have you been vaccinated for COVID-19 yet? If not what are you waiting for, especially after yesterday's CDC announcement? Tomorrow @ECDOH is holding 2 "Shot and a 🍺 Chaser" Clinics: @SteelboundSVL in Springville and @ThinManBrewery on Chandler St. Join us and get vaccinated! pic.twitter.com/L2ukbn1fFr

She continues: “Also, that is the age group where we're seeing the highest number of new COVID-19 infections now. So we're just trying to be playful, make it fun for people. We've given much of the Erie County population their first dose already.”

Many experts have advised to lay off the alcohol before and after taking a vaccine shot. However, there is no evidence that suggests alcohol after a shot interferes with the system.