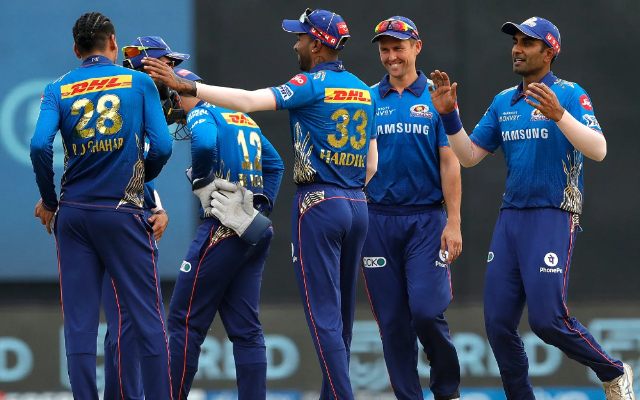 They axed their captain midway, made three changes in the eleven in their last outing, introduced Rashid Khan in the powerplay for the first time in the tournament, made him finish his quota by the 11th over, tried a new opening combination, and then slipped to the sixth loss of the season.

The tournament is half-finished and entering the second half, the most consistent of IPL side is seated convincingly at the bottom of the table with a Net Run Rate as bad as their axed captain’s mood, and points as less as fortune have favored them this season. After Hyderabad underwent a massive 55-run drubbing against the Rajasthan Royals, their skipper, Sanju Samson, in the post-match interaction said, “IPL is a funny league”.

One knows it to be true when seemingly well-placed and consistent teams go into awry situations. What happened to the Chennai Super Kings last year is Sunrisers Hyderabad’s case in 2021. There is no reason for a team that has Bairstow, Warner, Williamson, Rashid, Holder, Nabi, and Bhuvneshwar amongst others in the mix, and characters like Moody, Bayliss, Laxman, and Muralitharan at the helm, to have six losses in seven games. But in the “funny league”, it is SRH’s lowkey season this time.

The axing of Warner, the captain – who has taken the team to heights – and dropping Warner, the batsman – one of the league’s most consistent, let alone SRH – shows how seriously the management takes performances. He was dropped not for not getting runs, but for getting them slowly.

He was out against the Royals, where a Jos Buttler show sucked the life out of Hyderabad, and their batting unit not even momentarily looked like getting even close to the whopping 221-run target they were set.

They come against the Mumbai Indians, who have started to warm up as usual after a slow start and are fresh after a thrilling last-ball victory over arch-rivals Chennai Super Kings in their last game. In doing that, not only did they halt CSK’s winning spree of five matches, but got one of their biggest match-winners, Kieron Pollard, into his elements.

Perhaps, the only way to chase down a target of that magnitude was Pollard’s blitz, and his insane 34-ball 87 paved the way for MI to maintain their spot in the top-four slot. Living up to their reputation of slow starters, MI’s season went into a slightly extended spell of losses this year, but with two victories behind their back against a down-and-out opposition, making a hat-trick will be topping the list of priorities for them.

They also have good memories from their encounter against their immediate rivals in this edition. The Indians were unable to post anything substantial against them in Chennai and Sunrisers were 67/1 in a 151 chase with Jonny Bairstow on a roll. However, an epic collapse inflicted by Rahul Chahar in the middle-overs and finishing blows by Trent Boult, who both picked 6 wickets amongst them, alongside an extraordinary spell from Jasprit Bumrah wrapped the Sunrisers 13 runs short.

Dew has not played a major role thus far in Delhi, although Rohit Sharma suggested in the previous game that the wicket has gotten better with the progress of the game. In the four games so far, three have been won by the chasing side, and the only team who lost chasing was SRH against RR on Sunday. The previous two games have both recorded scores of well above 200: CSK got 218/4 that MI chased, while RR got 220/3. Another high-scoring encounter might be on the cards.

Playing combinations for SRH vs MI

In a big plus, SRH got back Bhuvneshwar Kumar back, while they also included Mohammad Nabi and Abdul Samad into the mix. Despite the result not going there way, SRH is expected to go unchanged.

Mumbai Indians included Dhawal Kulkarni and Jimmy Neesham in place of Nathan Coulter-Nile and Jayant Yadav respectively, in a change that Rohit termed “tactical”. Going against a tough side might have influenced the decision but neither of them had much role to play as they both were expensive and wicketless.

SRH vs MI Head to Head