Shaheer Sheikh has a massive fan following. The actor was last seen in Rajan Shahi's Yeh Rishtey Hain Pyaar Ke as Abir. Last year the show went off-air leaving fans disappointed. However, now the actor is returning on the small screen again with one of his iconic shows, Kuch Rang Pyaar Ke Aise Bhi. Yes, Kuch Rang Pyaar Ke Aise Bhi will be back on television with season 3 starring Shaheer Sheikh and Erica Fernandes as Dev and Sonakshi. Shaheer and Erica are one of the most loved on-screen couples and Dev-Sonakshi have a special place in everyone's heart. Shaheer Sheikh has played many amazing characters on-screen and his chemistry with each of his co-stars has been amazing. Be it Anant-Navya, Arjun-Draupadi, Dev-Sonakshi, Salim-Anarkali or Abir-Mishti, each of the pair has been quite popular.

Somya Seth, Pooja Sharma, Erica Fernandes, Sonarika Bhadoria and Rhea Sharma, everyone have been a part of Shaheer Sheikh's show and their chemistry had become the talk of the town. With Shaheer returning as Dev with Erica Fernandes as Sonakshi, we asked fans with whom Shaheer Sheikh look best with amongst Rhea Sharma, Erica Fernandes, Somya Seth, Pooja Sharma and Sonarika Bhadoria. Fans have finally given their verdict and surprisingly it is not Erica Fernandes but Rhea Sharma with whom fans love watching Shaheer. Truly Abir and Mishti from Yeh Rishtey Hain Pyaar Ke have won hearts. There is a demand from fans to bring back the show even now. For the unversed, Yeh Rishtey Hain Pyaar Ke was the spin-off show of Yeh Rishta Kya Kehlata Hai and had gone off-air due to low TRPs. 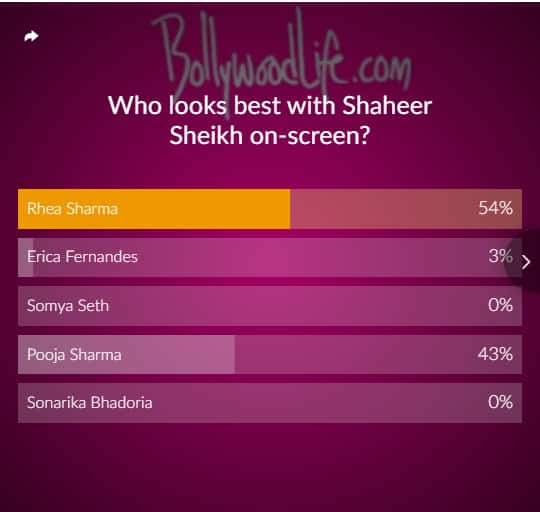