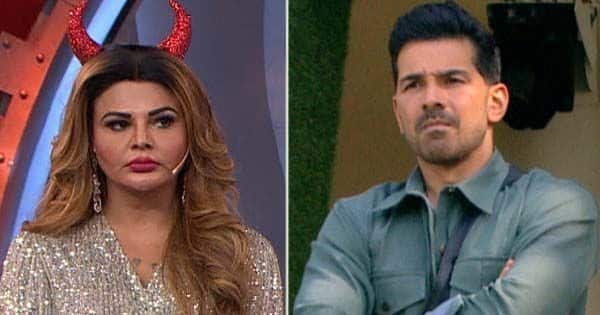 Rakhi Sawant courted the limelight during her stint in Bigg Boss 14 with trademark bizarre gimmicks, no filters attached. She managed to survive on the show and competed in the finale against popular names such as Rubina Dilaik, Rahul Vaidya, Aly Goni and newbie Nikki Tamboli. She also showered "crazy" love on Rubina's husband Abhinav Shukla. She went on to say on national television that she has frozen her eggs and will ask Abhinav to be the donor. Rakhi has now admitted that she got attached to Abhinav while she was faking love angle with her on the controversial reality show.

From pulling Abhinav's pant strings to calling him a pervert, Rakhi revelled in the nasty acts to turn the focus of the cameras towards her. Love her, hate her but you surely cannot ignore Rakhi Sawant. She is undoubtedly the queen of controversies courtesy her bizarre antics, gimmicks and loud behaviour.

"He was a nice person, apne biwi ka bohot care karta tha. Har cheez mein perfect tha (he cared for his wife a lot. He was perfect in every way)," she added.

The highlight about Rakhi, as we have seen over the years, is that she does not believe in filters when it comes to her antics. Rakhi definitely does not understand what not to do or say on national TV. She has openly spoken discussed her "botox" job during her entry, her nose implants after her fight with former contestant Jasmin Bhasin, and shared shocking revelations about her life claiming that a man had forced himself on her when she was young, in return of money. Bigg Boss had to intervene and ask her not to share such details on television. Rakhi also shared details about her marriage with someone called Ritesh, saying that her husband was already married and had a child when they got married.