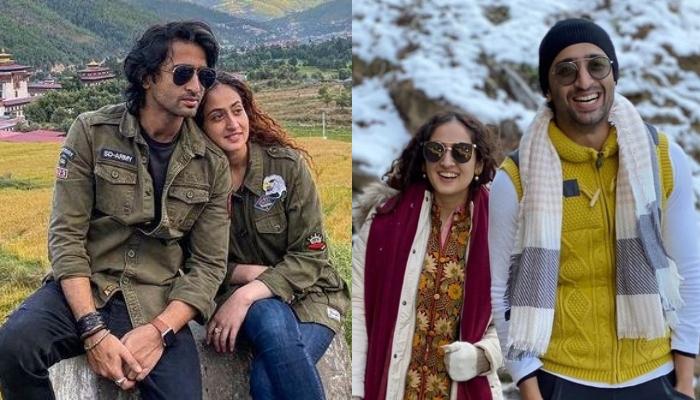 Shaheer Sheikh left everyone surprised when he announced his wedding last year in November 2020. They had a court marriage due to the pandemic and it was earlier reported that they are planning to have a traditional wedding in June 2021. Recently, there have been reports that Shaheer Sheikh and Ruchikaa Kapoor are expecting their first child together. A source close to ETimes said that Ruchikaa is in her first trimester. They're both looking forward to embracing this new phase in their lives. Now, in an interview with ETimes, Shaheer Sheikh reacted to these rumours. He said that it is too early to comment and he doesn't want to talk about it.

He also spoke about the wedding reception they were supposed to have in June 2021. He said, "The reception is cancelled now because of the pandemic. I lost two close relatives, who lived in Jammu, to COVID-19, so at the moment, I am a bit scared and anxious for the safety of my parents and everyone else. I would like my parents to come to Mumbai, but I wonder whether it would be safe for them to travel at the moment. I never wanted a big fat wedding, of course, my parents wanted us to get married in a grand manner, but I like things to be simple." He also spoke about how life has changed after marriage. He said that they have entered a new phase of life and are learning new things every day. Shaheer also mentioned that he was living in Mumbai alone for so many years and hence is learning to share his space with someone now. He also shared that he loves cooking for Ruchikaa. Shaheer and Ruchikaa will soon be moving to a new house.

Shaheer was also asked if he will explore other mediums after doing television for so many years. He said, "Today, people know me because I have done television for more than a decade. I am at ease when I portray a character on TV because it gives me the time to work on it, rehearse and connect with the masses. In television, you work with familiar faces, and the entire unit becomes family for you. I miss my Yeh Rishtey Hain Pyaar Ke family or Kuch Rang Pyar Ke Aise Bhi's team even now. It is a connect you build when you work together for 12 hours every day. I feel TV actors hardly have a social life because we are busy working."