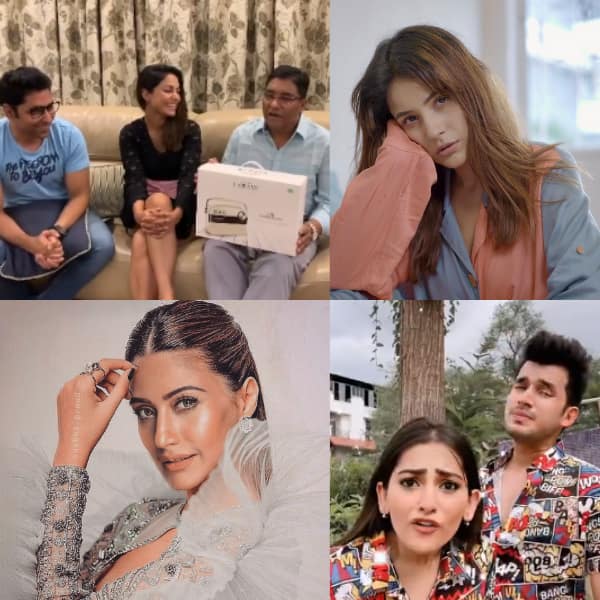 Hola! Is it just us, or even you felt that the week just flew by quickly? So much happened in the past week that we are just sorting through Instagram to look for the best Instagram posts by television celebs. There were so many amazing posts that we were in a fix for a long time. But we have jotted a couple of the best Instagrammers. From Hina Khan, Surbhi Chandna to Nikki Tamboli, Shehnaaz Gill, and more let's check out the TV Instagrammers of the week here:

Gorgeous beauty, Hina Khan, shared a throwback video reminiscing good times with her father, Aslam Khan. Hina lost her father a month ago and she shared the video, a month after his demise, saying that she misses him. In the video, we can see Hina with her father singing Gol Maal's Aanewala pal jaanewala hai. Her brother could be seen sitting beside her while her mother joined in later. Hina Khan captioned the post saying, "It's been exactly one month today Dad. We Miss you."

Bigg Boss 13's Sana aka Shehnaaz Gill shared a couple of pictures on her Instagram handle. The actress is not that active but whatever she shared on her gram, it is bound to go viral. Plus, the actress conducted a live session in this outfit itself wherein she replied to a fan saying that she would love to work opposite Sidharth Shukla in a film.

Our Bani aka Surbhi Chandna has been a little less frequent with Instagram posts too. We alongside her fans miss her pretty posts a lot. However, this past week, the actress shared a stunning solo picture in which she looks nothing less than a fairy. It's from a photoshoot and the outfit and the angle of the picture make her look like a fairy.

Anupamaa's Samar aka Paras Kalnawat and Nandini aka Anagha Bhosale aka SaNan has quite a fan following. The two keep sharing pictures and videos together and entertain their fans. Recently, Paras Kalnawat shared a video which is a reel trend of 'I Am Not Her Boyfriend.' The video is too cute to miss.

Nikki Tamboli who is shooting for Khatron Ke Khiladi 11 in Cape Town posed with 'Desi Boys' Varun Sood and Vishal Aditya Singh on a beach recently. While the boys were bared upper body, sporting shorts, Nikki was seen in a HOT black bikini. She captioned the post saying, "My very own desi boys in cape town @varunsood12 @vishalsingh713."

Sana Makbul also posed with the handsome hunks Vishal and Varun. The two had lifted her on their shoulders. Looks like the three of them have formed quite a bond on the sets of Khatron Ke Khiladi 11. She captioned the post saying, "Dostana vibes."

So, which of the above-mentioned posts did you love more? Let us know by tweeting @bollywood_life.