Actress Urvashi Rautela has extended a helping hand and donated oxygen concentrators. The actress recently made her debut internationally with the album ‘Versace Baby’ opposite the Egyptian actor Mohamed Ramadan. After garnering a good response, Urvashi Rautela contributed her earnings from her song to the Covid-19 Relief Fund in India and Palestine Society. 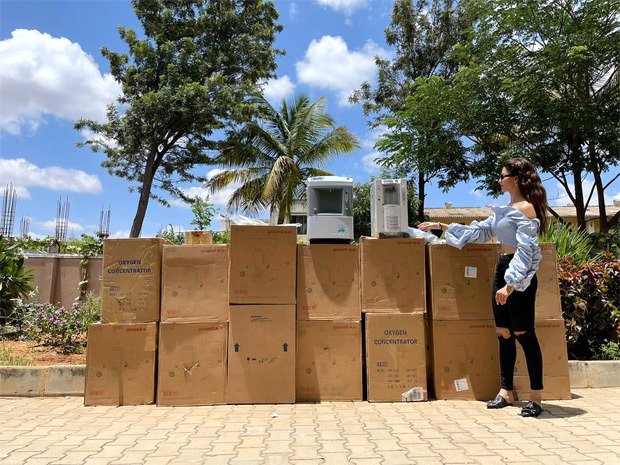 Urvashi Rautela hails from Haridwar, Uttrakhand. During these difficult times of the pandemic when Uttrakhand needed a helping hand, the actress recently flew to the state of Uttrakhand and donated 27 oxygen concentrators which cost Rs. 5 lakh each overall worth Rs. 1 crore rupees under the “Urvashi Rautela Foundation”.

Urvashi Rautela recently donated 20 oxygen concentrators in which overall cost Rs. 2 crores 35 lakh for 47 Concentrators. The actress was also seen distributing food packages along with masks and water bottles for the poor after Cyclone Tauktae hit Mumbai. Urvashi started a YouTube channel to earn revenue which she would donate just to help with the Covid-19 relief funds in India.

On the work front, Urvashi Rautela will be making her Tamil debut with a big-budget sci-fi Tamil film in which she will be playing the role of a microbiologist and an IITian, and later she is going to appear in a bilingual thriller Black Rose along with the Hindi remake of Thirutu Payale 2. The actress recently starred in the song ‘Doob Gaye’ opposite Guru Randhawa. Urvashi is starring in a lead role in Jio studio’s web series Inspector Avinash opposite Randeep Hooda, which is a biopic based on the true story of super cop Avinash Mishra.