Actor Abhishek Bachchan took to his Instagram and shared the news confirming that he went through an injury recently. Earlier there were reports last week which suggested that he had been hospitalized. The actor was shooting for his film Oththa Seruppu Size 7 Hindi remake in Chennai when he had this ‘freak accident’. Post which, he returned to Mumbai and was admitted to the Lilavati Hospital where his father Amitabh Bachchan and sister Shweta Bachchan visited him. 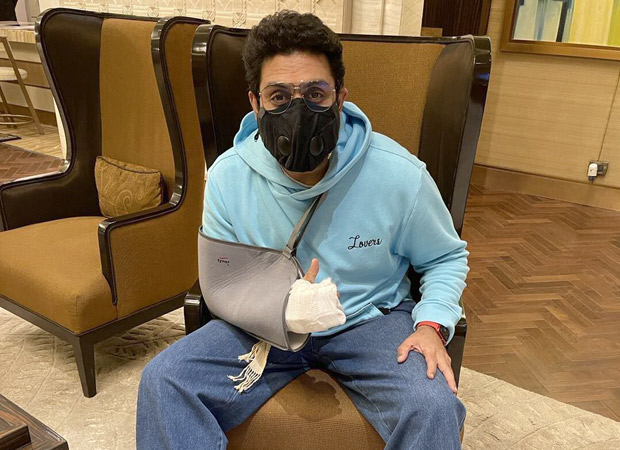 Now taking to his Instagram, the actor shared that he is now All “Patched-Up” and has returned to Chennai for resuming the shoot. Abhishek shared a picture in which he was seen with his arm in a sling. He was wearing a sky blue sweatshirt with loose fitted jeans and even made the thumbs-up gesture through his plaster. He was also wearing a black face mask, chunky cream-coloured sneakers and eyeglasses. Sharing the news, the actor penned a long caption describing his condition which reads, “Had a freak accident in Chennai on the set of my new film last Wednesday. Fractured my right hand. Needed surgery to fix it! So a quick trip back home to Mumbai. Surgery done, all patched-up and casted. And now back in Chennai to resume work.”

He further added and wrote his father famous dialogue, “As they say… The show must go on! And as my father said…. Mard ko dard nahin hota!

Ok, ok, ok it hurt a little. Thank you all for your wishes and get-well-soon messages.

Seeing this, many of Abhishek’s fans and friends from the industry took to the comments section and wished him a speedy recovery. Abhishek Bachchan’s elder sister, Shweta Bachchan called him, “best patient ever” while Riteish Deshmukh and his wife Genelia D’Souza wrote, “Get well soon”. While several others, including Navya Naveli Nanda, Karan Johar, Manish Malhotra, Zoya Akhtar, Anand Ahuja, Sonali Bendre among others also sent the actor good wishes.