Sidharth Malhotra is currently basking in the success of his recently released film Shershaah. The film which was released on Amazon Prime Video before the Independence Day weekend this year was well received. In the film, Sidharth essays the role of Kargil war hero Captain Vikram Batra who laid down his life in the service of the nation while recapturing Indian territories from Pakistani intruders during the Kargil War in 1999. The film directed by Vishnu Vardhan also stars Kiara Advani. Shershaah was also the opening film at the 1st Himalayan Film Festival in Leh, Ladakh. 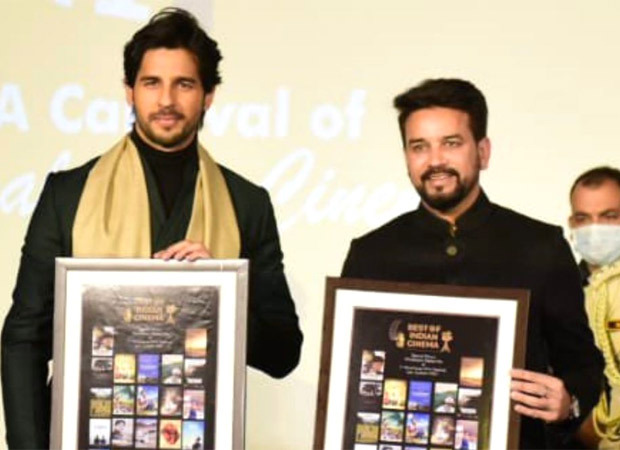 Sidharth Malhotra flew to Ladakh for the film festival where his film was being screened. At the ceremony, Sidharth also met the minister of Information and Broadcasting Shri Anurag Thakur.

Inaugurated the 1st Himalayan Film Festival with ‘Shershaah’ today. It was an complete honour to have shared the stage with our honorable Union Minister for I&B, Mr.Anurag Thakur.


Earlier in an interview with Bollywood Hungama while talking about his preparation for Shershaah, he said, “Well, by far definitely Shershaah, I have lived with the script of Shershaah for the longest amount of time than any other script that I have in my career. And I think with that time and interaction with real people attached to the film whether it’s Vikram Batra’s brother or whether his parents kind of subconsciously preparing me for this lovable Punjabi Boy who went on to become this very heroic soldier. So, I would say definitely prep went in two months sitting with the director Vishnu Vardhan, sitting with our writer Sandeep.”

He added, “But, I think for me predominantly spending time and going to Vikram Batra’s house was one that really changed me emotionally. It kind of gave me an immense amount of responsibility that this lovely very sweet Batra family in Palampur is going to be watching this film many years later or many months later at that time. I felt I have to give my best to justify their son’s life story. So, I think that was the biggest prep or the motivating factor that I needed.”

ALSO READ: Trade experts believe that Sidharth Malhotra-starrer Shershaah would have earned more than Rs. 100 crores if it had released in cinemas