The entertainment industry has rejoiced over the news of theatres opening across the country and Rohit Shetty and team Sooryavanshi kick off the Bollywood fest with the highly anticipated Sooryavanshi. Starring Akshay Kumar and Katrina Kaif in the lead, the film has special appearances from Ajay Devgn and Ranveer Singh who reprise the roles of Singham and Simmba. Now, the makers are gearing up for the release of their first song ‘Aila Re Aila‘. The song features Akshay Kumar, Ajay Devgn, and Ranveer Singh. It’s releasing on October 21. 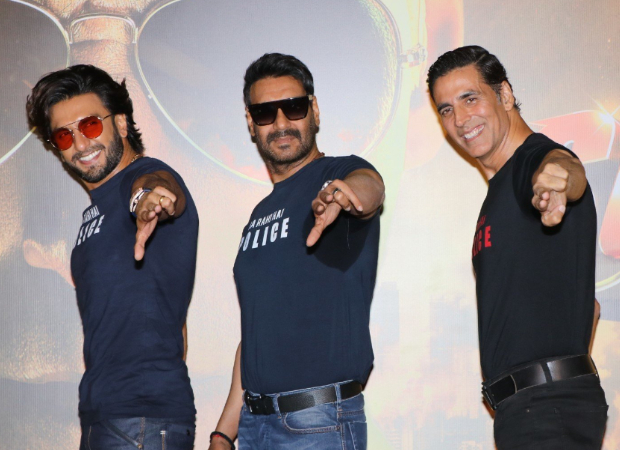 Bollywood Hungama had earlier reported that the makers of Sooryavanshi are adopting a novel strategy to promote their film and had shot a couple of videos in a theatre a few days back featuring Akshay Kumar, Ajay Devgn, and Ranveer Singh. Today, on the auspicious occasion of Dussehra, Akshay Kumar shared the first video, where the three stars are seen talking about the days where everything came to a standstill and then welcoming all to the theatres with Sooryavanshi.

Sooryavanshi belongs to the cop universe of Rohit Shetty which also comprises the characters of Singham (played by Ajay Devgn) and Simmba (played by Ranveer Singh). The film releases on November 5 in cinemas.

ALSO READ:  Sooryavanshi stars Akshay Kumar, Ajay Devgn, and Ranveer Singh welcome you back to the theatres with a special video