BREAKING: No Time To Die to release in Maharashtra on October 22; Shang-Chi expected on same day; Dune to have a delayed release in the state on October 29

The cinema halls in the state of Maharashtra will finally open on October 22. While Rohit Shetty and Akshay Kumar’s Sooryavanshi is expected to release either on Diwali, on November 4 or 5 and with no major Hindi release expected before, it’ll be the Hollywood films which would dominate the playing programmes in the theatres and multiplexes in the first two weeks. One of the most awaited Hollywood films of the year, Dune, will be released in India, on the same day as the USA, on October 22. With theatres in the state opening on the same day, it was naturally expected that Dune would be one of the first films to have a same-day pan-India release post the second lockdown. 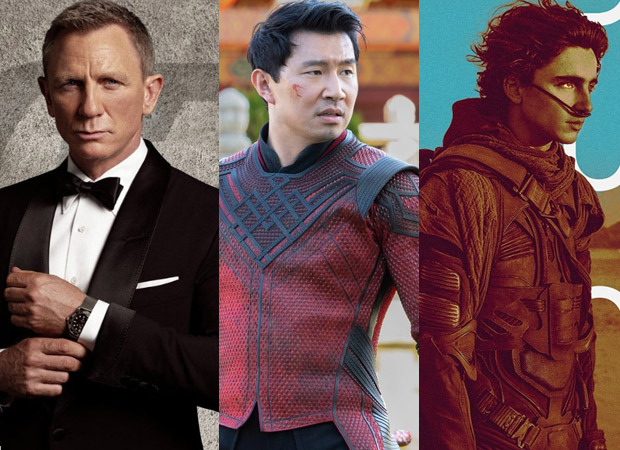 However, Warner Bros India today announced that while Dune would indeed release in India on October 22, it’ll have a release in Maharashtra only on October 29. It surprised many in the trade and also the fans who have been waiting to see it on the big screen. Some even feared the worst that the Maharashtra government had revised the opening date of cinemas from October 22 to October 29!

Witness an epic for the ages. #DuneMovie releases in cinemas in India on Oct 22 in English & Hindi.
In Cinemas in Maharashtra on October 29th

However, a source told us, “Aisa kuch nahi hai. The cinema halls will reopen on October 22. There’s no change in plans. The decision was taken by Warner Bros as there are too many films that will release on October 22 in Maharashtra. Dune would not get the required screens, especially the IMAX and 4DX screens. Hence, it was decided to delay the release of Dune by a week in the state so that it can get the best IMAX and 4DX show timings and also in normal screens. Dune is a grand, epic film which would be best enjoyed on as big a screen as possible.”

When asked which other films would be releasing on October 22, the source revealed, “The James Bond film, No Time To Die, was released all over India on September 30. But in Maharashtra, it’ll be released on October 22. Then, Sony Pictures revealed that it’ll release Venom: Let There Be Carnage in Indian cinemas on October 14 and in Maharashtra on October 22. Both these films will take up a lot of screen space.”

The source also shared one more exciting news, “Although it’s not sure as of now, Disney might release the Marvel super-hit film, Shang-Chi And The Legend Of The Ten Rings, on October 22 (it released elsewhere in India on September 3). And what if Viacom18 also decides to bring A Quiet Place Part II, releasing in India on October 8, in Maharashtra cinemas as well on the 22nd?

So it makes sense to let Dune release a week later; otherwise, the audiences would have too many films to pick and some films would suffer as a result. It’s unusual but then we are living in unusual times.”

A trade expert quipped, “Purane dino ki yaad aa gayi…a time when films would have a delayed release in certain parts of the country. Nevertheless, the pre-Diwali weeks would be an exciting period for Hollywood film lovers in Maharashtra, who have been craving to watch these films on the big screen. For the exhibitors as well, it’ll give them a nice dry run of sorts before the two biggies – Sooryavanshi and Marvel’s Eternals – arrive on Diwali.”

Also Read: Daniel Craig bids farewell to James Bond universe with an emotional speech after wrapping up No Time to Die

The post BREAKING: No Time To Die to release in Maharashtra on October 22; Shang-Chi expected on same day; Dune to have a delayed release in the state on October 29 appeared first on Bollywood Hungama.