SS Rajamouli and PVR collaborate for a first of its kind association; PVR will now be referred to as PVRRR

One of Indian cinema’s most successful filmmakers – SS Rajamouli and the country’s largest cinema exhibitor PVR have entered into a first of its kind association of all time for the highly-anticipated action drama RRR featuring Ram Charan, NTR Jr, Ajay Devgn, and Alia Bhatt, scheduled to release on 7th January, 2022 world over. 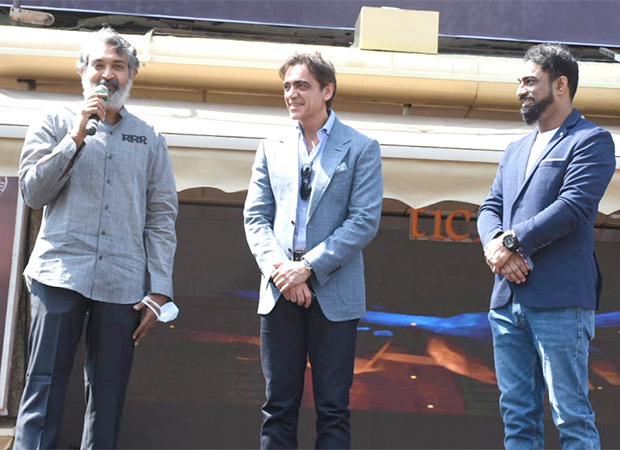 For the first time in the history of world cinema, the largest multiplex chain operator – PVR has decided to alter their brand identity and logo to the movie name RRR. Starting today, PVR will now be referred to as ‘PVRRR’. Announcing the same, filmmaker SS Rajamouli and Ajay Bijli – Chairman & Managing Director PVR Ltd have unveiled the new ‘PVRRR’ logo in front of the gathered media and spoke about this unique and never-heard-before movie association.

Post the logo unveil, the PVR team launched the special ‘PVRRR promo’ which will be played in all PVR multiplex chains across the country. The media personnel was taken in for a huge surprise, as they witnessed a special teaser of India’s biggest action-drama RRR. Needless to say, the impressive teaser was highly appreciated by the media fraternity with whistles, cheer, and uproar.


Commenting on the initiative, Mr. Ajay Bijli, Chairman and Managing Director, PVR Ltd, said, “RRR is one of the biggest, most expensive, and greatly anticipated movies of 2022. We are proud to be associated with this larger-than-life spectacle, helmed by SS Rajamouli and considered to be yet another game-changer in the movie business. I am sure this initiative will be able to generate good buzz for ‘RRR’ and build huge anticipation among the movie buffs.”

Echoing the same sentiment, Mr. SS Rajamouli added, “I am really happy that theatres are reopening, as I believe the magic of cinema is truly enjoyed in theatres. We are happy that RRR will be releasing in cinemas in January next year and to announce the same what better way to associate with PVR which is now PVRRR.”

Set in pre-independence India, the film is a fictional take on the younger days of celebrated freedom fighters, Komaram Bheem and Alluri Seetharamaraju. The biggest multi-starrer of India features, Ram Charan, NTR Jr along with Ajay Devgn, and Alia Bhatt. The project is helmed by SS Rajamouli, who was also the mastermind behind the record-breaking Baahubali series.

PEN Studios has bagged the theatrical distribution rights across North India and has also bought worldwide electronic rights for all languages. Pen Marudhar will be distributing the film in the North Territory.

RRR will hit the screens worldwide on 7th January 2022.

ALSO READ: Gangubai Kathiawadi vs RRR: Will two films of Alia Bhatt and Ajay Devgn release in the SAME week?

The post SS Rajamouli and PVR collaborate for a first of its kind association; PVR will now be referred to as PVRRR appeared first on Bollywood Hungama.