Kangana Ranaut slams haters with an inciting picture in reaction to ‘another FIR’, see here

It’s a new day and a new FIR has been filed against Bollywood’s favorite troublemaker, Kangana Ranaut. Actor Kangana posted a provocative photograph on Instagram about the ‘mood at home’. She wrote, “Another day another FIR… just in case they come to arrest me… mood at home.” 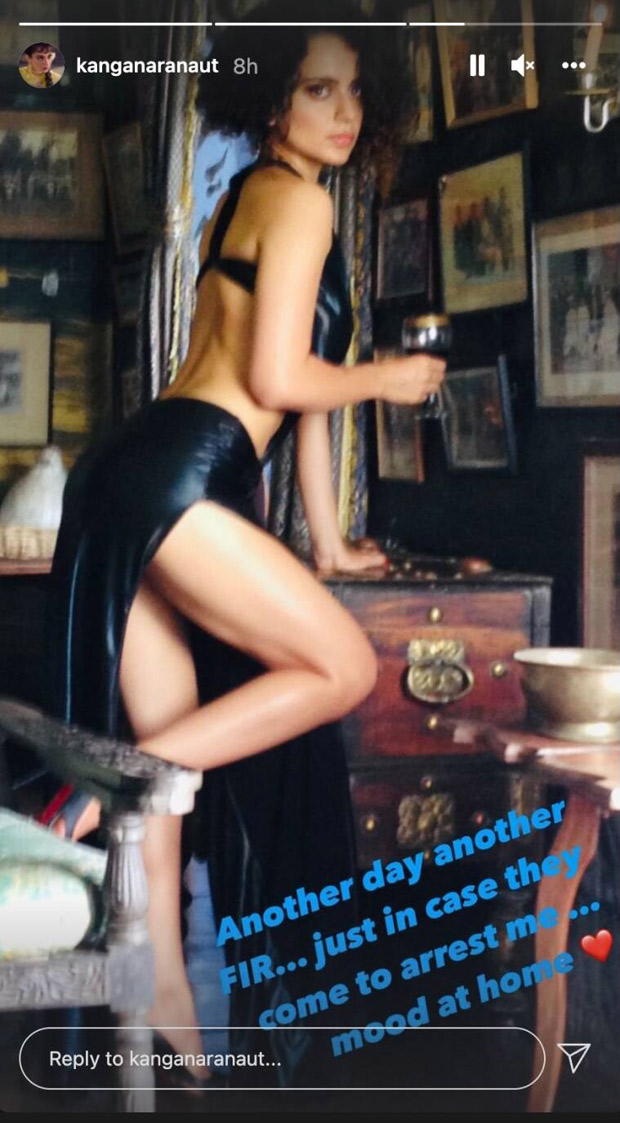 Recently, an FIR has been filed against Kangana Ranaut by members of the Sikh community for allegedly hurting their religious sentiments. The FIR was filed by Amarjeetsingh Sandhu along with leaders of Delhi Sikh Gurdwara Management Committee (DSGMC) and Shiromani Akali Dal (SAD). As per a complaint on November 21, they came across a post on Kangana’s profile that offended their beliefs. The post was written in English and Hindi.

Members of DSGMC reported that the infamous Ranaut had purposely and deliberately characterized the farmers’ protest (Kisan Morcha) as a Khalistani movement and also dubbed the Sikh community as Khalistani terrorists. “We have registered an FIR under Section 295A (Deliberate and malicious acts, intended to outrage reli­gious feelings of any class by insulting its religion or reli­gious beliefs) against the actress. We are investigating the matter further,” said Gajanan Kabdule, a senior police inspector of Khar police station.

This is not the first FIR that has been filed against this Bollywood actress. Kangana has been in legal trouble before and more since late actor Sushant Singh Rajput passed away. Kangana is majorly known for spreading hate speech on social media due to which she was banned from Twitter at the beginning of the year.

The post Kangana Ranaut slams haters with an inciting picture in reaction to ‘another FIR’, see here appeared first on Bollywood Hungama.